This story was originally published at mountainx.com.

Grady Hendrix, author of Horrorstör (set in a haunted IKEA-type big-box store), returns with the 1980s-themed My Best Friend’s Exorcism. Of a recent author event he said, “I’m going to be talking about the Satanic Panic in the ’80s when everyone thought heavy metal music and backwards masking were sending kids straight to hell, Dungeons and Dragons was a doorway to evil, and Saturday morning cartoons were indoctrinating children into the occult.” 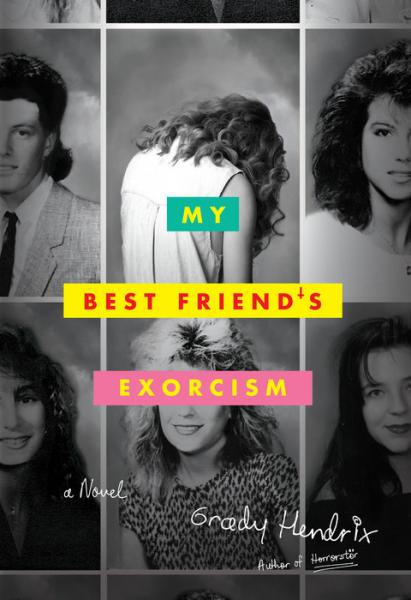 The book — part humor and part horror — borrows a big from Hendrix’s own high school experience (as he explains below, in a Q&A with Xpress). Hendrix is also the author of Occupy Space and Satan Loves You, the co-author of the YA series The Magnolia League and the graphic cookbook Dirt Candy, co-founder of the New York Asian Film Festival, and a contributor to Slate, Village Voice and Variety, among others.

Alli Marshall: I suspect most people think their high school experience was, at least in part, a horror story. What was the idea for you that initially led to My Best Friend’s Exorcism?

Grady Hendrix: The title popped into my head first. Then I figured best friendships were most intense in high school, and my high school experience was in 1988, so that’s when it would be set. Then I wrote a first draft and showed it to my wife because I was feeling pretty studly … and she told me it was a dumpster fire of secondhand ideas and stolen characters. And she was right. I was just recycling John Hughes movies and other people’s ideas about high school. So I sat down with all my letters and diaries from high school (and all her letters and diaries from high school) and read them for about three weeks. And somewhere in there, I had a genuine, authentic memory about what it felt like to be in high school in the ’80s, then another, and then another, and then I was off and writing.

I love the high school yearbook design of My Best Friend’s Exorcism — are those photos from your yearbook by any chance?
My author photo is my senior portrait and I thought that was horrifying enough. The rest are from the staff at [boutique publisher Quirk Books], so there’s a heavy New Jersey/Philadelphia vibe to them. One thing I’d like to point out is that even though I wrote all the yearbook inscriptions on the inside covers, our designer, Tim O’Donnell, farmed out the actual handwriting of them to about 32 different teenaged girls, like a yearbook-signing sweatshop. END_OF_DOCUMENT_TOKEN_TO_BE_REPLACED

Mood.
Baby pine needles are so soft and so green.
Post-skate at Carrier Park. Someday I'll be good at this. For now it's awkward fun on eight wheels.
There are, of course, a number of ways to take this. Upon reflection, none are wrong.
I took a fun ebike tour with @flyingbiketours this morning. I'm considering becoming a tour guide.
@janekramermusic opening for Wild Feathers at @salvagestation.