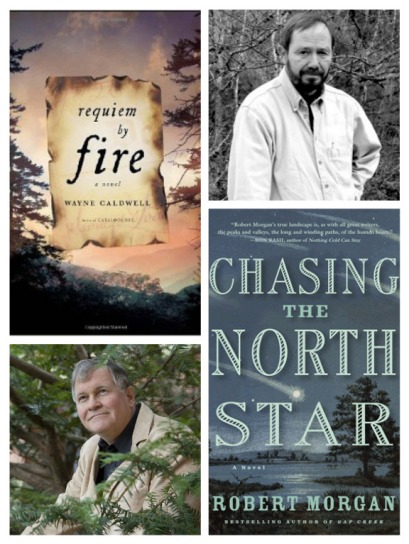 During an event sponsored by the Western North Carolina Historical Association, authors Wayne Caldwell (Cataloochee and Requiem By Fire) and Robert Morgan (Gap Creek and Boone: A Biography)read from recent work (Morgan’s latest novel, Chasing the North Star will be published on April 5, by Algonquin Books), discussed Appalachia as setting and inspiration, and talked about their own writing processes.

On being from Western North Carolina:

Robert Morgan: It was the example of Thomas Wolfe. If he could grow up in Asheville and write Look Homeward Angel, maybe I could write something.

I grew up with one foot in the 19th Century. Remember, the people coming here [now], whether Hispanic or retirees, they all have stories, too.

Wayne Caldwell: When I published my first short story, someone asked me if I considered myself as Appalachian writer. I’d never even thought about it.

On perceptions of Appalachia in literature

Caldwell: Traditional Appalachian people have been centered on the bible for centuries.

Morgan: [But} I’d never heard of snake-handling in Appalachian churches until I read about it in novels.

Caldwell: [Contemporary Appalachian literature] focuses on drugs, crime and violence. There’s a darkness that’s come over the view of Appalachia. It bothers me that that’s what New York [publishers] want to buy.

Morgan: Publishers and editors are caught in a rapidly changing business. I realize my writing is old-fashioned. … I’m lucky to get published. The answer to how to get published is any way you can. There’s no rule, you just have to try everything.

The hardest thing to publish is short stories because every other person in the Unites States is writing short stories.

Morgan: When I work in fiction, I begin with the voice because it’s voice-driven

Caldwell: I try tho write every day, and I try to do it at the same time [of day]. I like to write for a couple of hours in the afternoon. If I have the energy in the evening, I like to dedicate an hour to cleaning up what I’ve [written] that day.

Morgan: The most important advice I can give is to have a schedule that allows you to write every day. I’m lazy — I never work more than a couple of hours a day. But if you can give two hours or an hour and a half, it adds up.

2 thoughts on “Wayne Caldwell and Robert Morgan: Writing and Appalachia”

In the coffin at Fleetwoods for the @AshevilleFringe preview party. My shirt says fearless, not earless, but because of this fancy new haircut you can totes see my ears. 📷 by @lboogiericedawg
Pagan winter celebration, Northern Ireland. From dangerousminds.net
1976. The pants, the smirk.