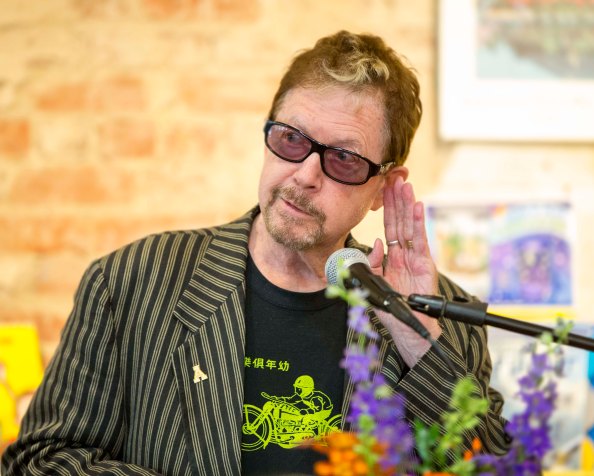 According to author Tom Robbins, he didn’t hit his stride as a novelist until Jitterbug Perfume. It was his fourth novel, published in 1984; Robbins was 52. Not that there’s a right age to hit one’s stride as writer; nor do writers (unlike many musicians and actors) age out. But, if there was a takeaway from Robbins’ talk at Appalachian State University in Boone last week (just before his Asheville appearance at Malaprop’s on Sept. 13), it’s that he was never much concerned with convention.

“My so-called literary career,” he said to the sold-out crowd at the Schaefer Center for the Performing Arts. “I prefer to think of it as a careen.” To illustrate that point, Robbins — who was born in Blowing Rock — read a selection of stories from his new memoir, Tibetan Peach Pie. Anecdotes included an attempted bank robbery (he was an elementary school student at the time) and early forays into writing.

The Blowing Rock Town Council proclaimed Sept. 10 “Tom Robbins Day,” and Joyce Ogburn, dean of libraries at ASU announced that the manuscript for Tibetan Peach Pie will be housed at the Boone-based University. Craig Popelars, director of marketing at Algonquin Books and chair of ASU’s library advisory board, introduced Robbins as “The Bad Boy Bard of Blowing Rock.” The author, in dark glasses and trademark cool demeanor, took it all in stride.

Robbins described Tibetan Peach Pie as “the memoir that I swore I’d never write,” claiming that “to talk about a memoir is like asking a recently deflowered virgin about her first sexual experience, especially if she’d been drunk at the time of her seduction.” Still, Robbins seemed happy to dish, peppering his reading with colorful asides.

There was the first time he took LSD in the early 1950s: “I felt like a nation of one.” And how his 1980 novel, Still Life with Woodpecker, led to an investigation by the FBI — 15 years after the book’s publication — in which Robbins was considered a suspect in the Unibomber case.

During a Q&A following the reading, Robbins talked about his artistic process. His approach to editing, he admitted, is “a little unorthodox — I write one draft, by hand, but I never leave a sentence until it’s as good as I think I can make it.” Occasionally he’ll rewrite an entire sentence, but he never revises a book. Robbins then dictates the manuscript to an assistant who types it into a word processing document. “No one at any publishing company has ever edited my work,” he said.

The author revealed that, upon first hearing Bob Dylan’s song, “One More Cup of Coffee for the Road,” he wanted to write a novel that had the same mood. “Still Life with Woodpecker came out of that.” And the bandaloop dance from Jitterbug Perfume came to him in a dream. “The young woman in bed with me was startled, to say the least,” he deadpanned.

When asked what advice he could offer to young writers, Robbins said, “Stop taking yourself so seriously. It’s all cosmic theater. It’s all a grand and goofy ephemeral show. The important thing is to play your part to the very best.” That, and to write with style. Because, he said, “A novel without style is like a swan without feathers: just another plucked chicken.”